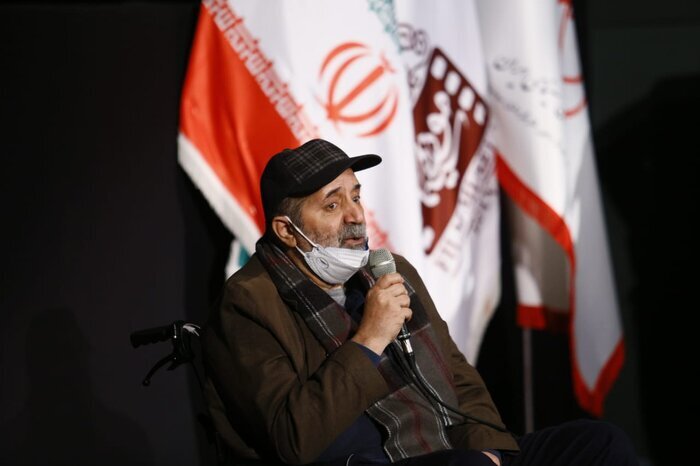 The Film Museum of Iran has honored Jamal Shourjeh, the director of the Iran-Algeria co-production ‘Ahmed Bey’.

The director has been honored for his lifetime achievements at the museum, while a number of his colleagues were gathered for the honoring ceremony to talk about the filmmaker.

His close friend and film director Javad Shamaqdari delivered speech at the honoring ceremony, saying “Mr. Shourjeh was highly successful in his career and his name shines in the sacred defense and resistance cinema.”

Shamaqdari also praised Shourjeh for his ‘33 Days’, a film on the Israeli 33-Day War of 2006 against Lebanon, and ‘Ahmed Bey’ about the last Ottoman Bey who ruled Algiers during the 19th century.

“I hope he will soon recover to edit his film,” Shamaqdari said, adding “‘Ahmed Bey’ cast members, including Gérard Depardieu, love Shourjeh and he [Depardieu] would attend the ceremony if possible.”

Sitting in his wheelchair, the 66-year-old Shourjeh went on the stage with the help of a family member and thanked his friends and colleagues for the attendance and his family for the help.

He said “I thank [cinematographer] Touraj Mansouri who was my best mate in the ‘Ahmed Bey’ project, encouraging me to bear, because ‘Ahmed Bey’ was a difficult project and I suffered the stroke two weeks after the completion of shooting.”

“One day I hope the film is screened in Iran, and I hope to stand before you to bow deeply to you,” he added.

The ceremony came to an end with screening some scenes from Shourjeh’s war drama ‘The Epic of Majnoun’ (1993).

‘Ahmed Bey’ is his latest project, which began in 2018. However, its post-production was not completed due to a massive stroke. He underwent several surgeries in 2019 and since then he has been confined to a wheelchair over the past three years.

Shourjeh is most famous for his movies on the Iraq-Iran war (1980-1988), known as the sacred defense. Iranian cinema to be reviewed