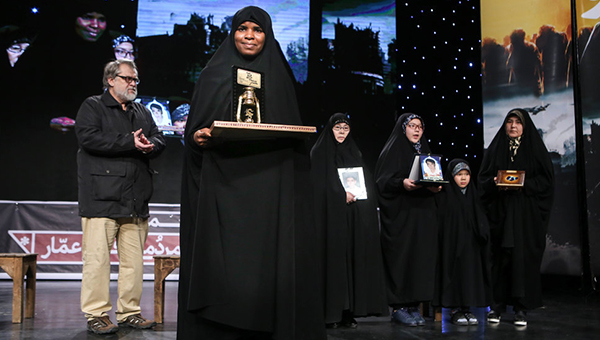 Zakzaky’s daughter attended the festival’s opening ceremony at Tehran’s Andisheh Hall on December 30, 2018, and received a Golden Lantern on behalf of her father.

The accolade was presented to the daughter after screening of a video titled ‘The Khomeini of Africa’. The video is about the leader of the Islamic Movement of Nigeria who has been jailed since 2015.

She received the award from celebrated veteran Iranian filmmaker Nader Talebzadeh who is also the president of the festival.

More than 80 documentary and feature films are on the screening schedule of different sections at the 9th APFF.

The event has set to screen docs and movies such as ‘Leili’s Life’ by Keramat Pourshahsavari, ‘Mahmoud’ by Ali Zohairi, ‘Album’ by Mohammad Qasempour, ‘Mastoureh’ by Elham Hadinejad, ‘Chocolate Dad’ by Ehsan Lotfian, ‘Eighteen Percent’ by Mostafa Shaban, ‘Snowy Peaks’ by Nasser Naderi, ‘Man and the Farm’ by Masoud Kargar and ‘Unfinished Documentary’ by Ali Sarv.

Different editions of the Ammar Popular Film Festival have been held from 2010 to 2019 in Tehran, showcasing international documentaries, fictions, animations, clips, music videos, photo albums and other kinds of media with a focus on social and economic issues.

Named after Ammar Yasir, a close companion of Prophet Muhammad [PBUH], the APFF goes against promotion of “individualism and extreme enjoyment without caring about the society's troubles and other human suppression,” the event’s official website notes.

It was established by a number of Iranian revolutionary figures to take a global view of cultural, socio-economic, environmental and political issues that may endanger peace, freedom and justice in the world.

The festival also enjoys an international version which aims “to raise real awareness and responsibility among the general public,” the website reads, adding the event’s mission is to create an atmosphere in which independent filmmakers and thinkers can gather together.

The 9th edition of the APFF is slated to run in Tehran and several other Iranian cities until January 10, 2019.