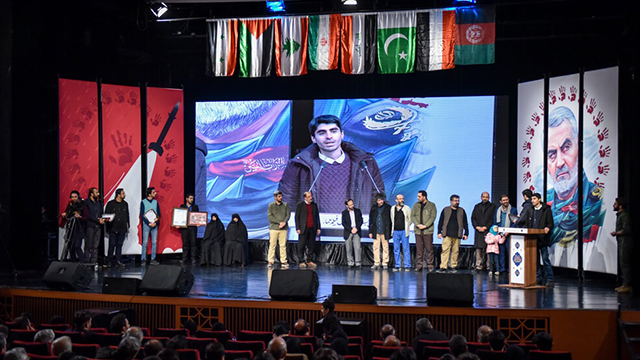 The 10th edition of the Ammar Popular Film Festival (APFF) has announced the winners.

Directed by Amir Dasargar, ‘No-Fly Zone’ was crowned best film at the closing ceremony of the 10th APFF at Tehran’s Andisheh Hall on Friday.

‘No-Fly Zone’ is narrates the story of three teenagers who are preparing to join drone competitions. While getting ready for the match, the teens notice a Cheetah appearing in the area. In the process of doing the project, they face various obstacles resulting in a conflict with certain people.

The Golden Lantern for the best short film went to ‘Water Never Dies’ by Hossein Darabi. The short film is about an Iranian commander during the Iraq-Iran war in the 1980s.

The award for Best Documentary on the Sacred Defense was presented to ‘War 29’ by Mehrdad Haqshenas.

‘The Fame Club’ by Mohammad-Hassan Yadegari won the Golden Lantern for Best Documentary on Soft War.

‘The Sweetness of Damascus’ by Alireza Baqsheni grabbed the award for Best Documentary on the Defenders of the Holy Shrines.

‘Father Taleqani’ by Mohammad-Ali Mohammad-Doust and ‘Exam’ by Sajjad Riahi shared the award for Best Documentary on National Memory.

‘Defense Strength’ by Ali Tadi, ‘Iron Inventor’ by Mohammad-Javad Raeesi, ‘Bazaar of Tsars’ by Mosen Maqsoudi and Mehdi Faridi, ‘Besides Each Other’ by Mojtaba Khayyam-ol-Hosseini, ‘Homeland of Dreams’ by Mehdi Farsi, ‘To One of Us’ by Amir Asgari, ‘The Six People’ by Mohammad-Mehdi Yazdan-Parast, ‘Narration of Leadership’ by Mehdi Naqavian, ‘Omidi H.’ by Ali Zahiri, ‘Usual Stories’ by Babak Majidi, and ‘Brick Dream’ by Davoud Moradian were among the other honorees of the event.

The APFF goes against the promotion of “individualism and extreme enjoyment without caring about the society's troubles and other humans’ suppression,” the event’s official website reads.

The 10th edition of the APFF kicked off in Tehran on January 1 and came to an end on January 9.