Oscar-winning Iranian director Asghar Farhadi says he refrains from judging the behavior of his movies' characters, and leaves the judgment to the the viewers. 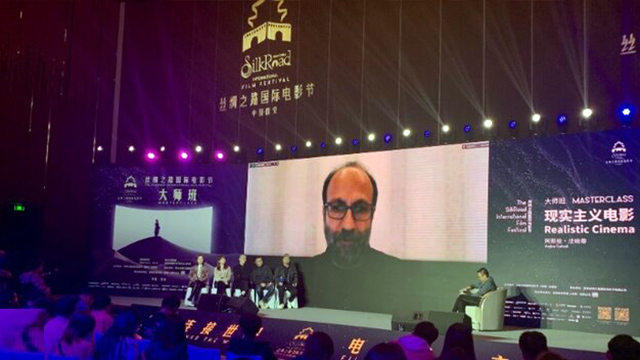 Oscar-winning Iranian director and screenwriter Asghar Farhadi says he refrains from judging the behavior of the characters of his movies during their writing process, and leaves the judgment to the viewers.

Asghar Farhadi gave a virtual master class for Chinese young cineastes in the Chinese festival, which opened in the city of Xi'an on October 11 and will last until Friday, via video conference. During the session, he also answered the journalists’ questions.

Referring to ‘The Past’ which he shot in France, Farhadi said the film has two protagonists, an Iranian and a French.

“I am an Iranian. In my creation, some of my emotions are closer to the Iranian role. I know how he would think. But for the French, it is not that close. But in the creation of the screenplay, I try not to favor anyone, and do not judge anyone's behavior. The audience should be the one to judge.”

Speaking about his experience in writing scripts, he said he turns ideas that pop up in his mind into films when he finds out that they are suitable to be expressed in a form of a movie, citing as example an idea which is “related to social concerns, can reflect some social problems, and psychologically caters to the needs of the audience”.

The 49-year-old director said he begins writing a screenplay with an outline and then gradually expand on it.

“At the beginning, I have no idea about the end of the film,” he stressed.

Farhadi added that he never begins shooting a movie before its screenplay takes shape, noting that writing a script takes a long time. Referring to the ‘The Past’ and his Spanish-language ‘Everybody Knows", he said “in my films, I try to show life in Iran as much as possible.”

He stressed that making films in Persian language and addressing the problems of “our society” is “simpler”.

Answering a question about the impact of the coronavirus pandemic on filmmakers, Farhadi said he believes that some filmmakers will address public health topics in their movies in the future, noting that the pandemic has affected all aspects of life, not just filmmaking.

Farhadi has received two Oscars. He won the first Oscar award for his movie 'A Separation' in 2012.

In 2017, 'The Salesman' brought him the second Oscar for Best Foreign Language Film. ‘Knock Out’ nominated as China’s favorite