The Global Music Awards has announced the winners of different categories, with several Iranian musicians on the lists.

Announcing the winners on Thursday, the organizers awarded the Gold Medal of Classical Crossover category to Lyra Duet from Iran for its album ‘Tehran Mars’.

Gary Muszynski from the US won the Gold Medal - Best of Show in Emerging Artist - Innovation in Sound category for his ‘Roots & Wings’, while Darlene Koldenhoven from the US received the Gold Medal of Classical Crossover – Composer for her ‘The Grand Piano Spa’.

The Gold Medal in Composer category went to Monica Cardenas for ‘10 Preludes and Fugues of Latin America’ from Peru and Germany, and Rochelle Sennet from the US was awarded with the Gold Medal in the Album – Instrumentalist category for her ‘Bach to Black: Suites for Piano’.

The Gold Medal of Instrumental Music Album was presented to Jan Michael Looking Wolf from the US for his ‘Earth Tribe’, while Amir Hedayah from Egypt was honored with the Gold Medal of Composer – Original category for his ‘Dofaat Beirut’.

Amir-Hossein Nouri from Iran was honored with a Bronze Medal for ‘Some Years Later’.

Mehrdad Delnavazi with ‘Rhapsody for Ney and Orchestra’, ‘Moslem Alipour’ with ‘Rara’, Arash Avesta with ‘Solidarity’, and Farid Hamedi with ‘Sound of Fetus’ were some of the other Iranian silver and bronze medal winners. 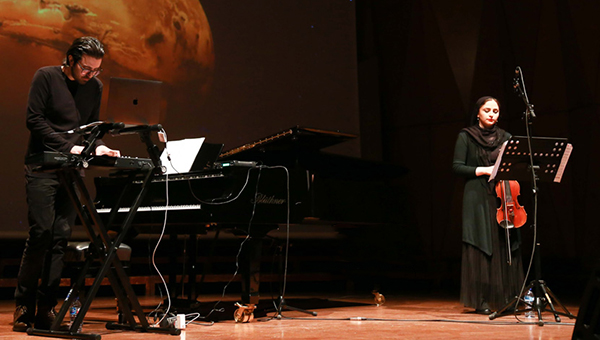 According to the website of Lyra Duet, it is “a crossover Classical/New Age band created by a couple: Arash Hazhirazad (pianist, keyboardist, composer) and Yeganeh Hosseini-Nia (violinist), both music graduates from the Fine Arts University of Tehran. The duet heralded its serious musical career in 2010 with a classical piano and violin recital held at the German Church, Tehran. Their performance has resonated through many a concert hall in Tehran and across the nation with a large repertoire of notable works of Western classical music for the piano and violin.

Their curiosity and enthusiasm for new experiences drove them to adding new flavors to their already established ensemble, by creating their own music. They use drums, synthesizer, and electronic soundscapes, drawing upon their knowledge of classical music to produce a sound which represents their dual passion for music and astronomy. The Lyra Duet tries to cross the boundaries between genres by creating a music which is easy to understand but hard to forget.

In 2016, they released their debut album ‘Tehran Mars’ which went on to win the Iranian Music House Award for the classical/new age album of the year. Their second album titled ‘Eight Minutes and Twenty Seconds’ (2019) is a musical journey from the sun to the earth at the speed of light! A single track ‘Cold Winter’ of their collaboration with celebrated musicians has been already published.”

The music piece above is an extract from the duet’s winning album ‘Tehran Mars’. Iran movie music to be made