Iran doc ‘I Won’t Remain Alone’ is to vie at Mammoth Lakes filmfest in US. 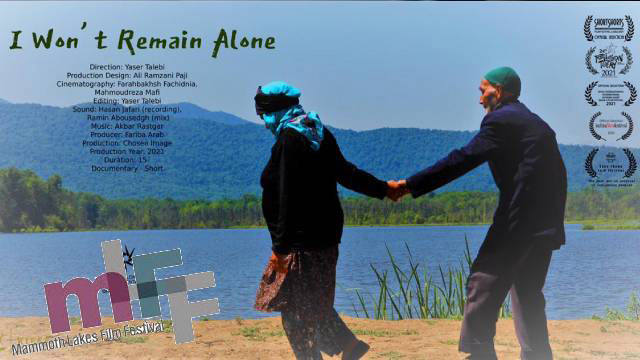 Iranian short documentary ‘I Won’t Remain Alone’ has been accepted to take part in the Mammoth Lakes Film Festival (MLFF) in the US.

Directed by Yasser Talebi, the film that took 5 years to produce will be screened at the short documentary competition of the event’s 7th edition.

Being themed on forgiveness, love, humanity and immortality, ‘I Won’t Remain Alone’ follows the story of Sorayya and Seyyed-Jalal, an underprivileged old couple who lives in a distant village in northern Iran.

Previously, the doc has been screened at a number of international film festivals, including the Short Shorts Film Festival & Asia in Japan and the Regina Int’l Film Festival & Awards in Canada.

Besides, Talebi, the director of the flick, has already attended many global events with his award-winning doc ‘Beloved’.

The five-day MLFF is an international film festival that takes place annually as a unique elimination-style tournament.

The festival was founded by two entertainment industry veterans from California Natives.

In 2009, the Mammoth Film Festival was named by Moviemaker Magazine as one of the 25 most worthwhile festivals in North America. MovieMaker also described it as “American Idol for moviemakers ... rapidly growing in recognition and praise.”

This year’s MLFF will be held on September 22-26 in Mammoth Lakes, California. ‘I Won’t Remain Alone’ in Thessaloniki ‘I Won’t Remain Alone’ to vie in Canada Iran short to go to America